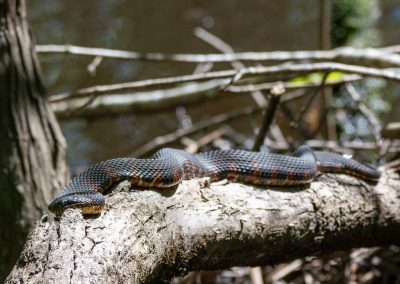 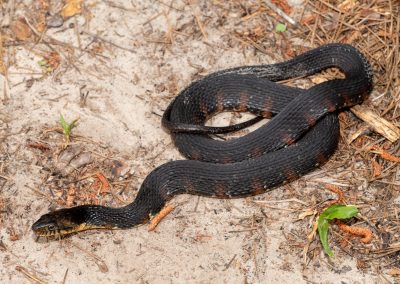 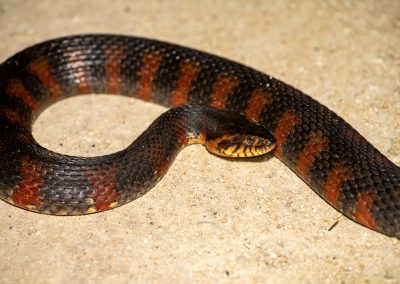 Description: Often referred to as the Banded Water Snake, this snake is recognized by unbroken brown to reddish cross bands extending down the length of their dark brown body. They have dark markings on the edges of their upper lip (labial) scales and have a dark stripe extending from the back of the eye to the base of the jaw. The belly of this snake is pale with square or triangular reddish blotches on the edges. This is a fairly thick bodied snake with keeled scales. The average adult length is 22 – 40 inches (61- 107 cm).

Natural History: The Southern Water Snake is a generalist and occurs in almost any aquatic habitat in its range. They are frequently seen basking on fallen logs or on the edges of ponds, lakes, rivers, and streams. They might also be observed crossing open water with their head above the water and their body propelling them as it is submerged just beneath the water surface. When approached they are quick to retreat into and under the water where they can disappear from sight in the aquatic substrate. If picked up they will vigorously strike and musk their captor.

The majority of this snakes diet consists of fish and amphibians. They themselves may be consumed by large wading birds, alligators, and other snakes like Cottonmouths (Agkistrodon piscivorus).

Southern Watersnakes can also superficially resemble Cottonmouths. However, Cottonmouths typically will have a wider head, pit organs just behind their nostrils, and elliptical pupils. The upper lip (labials) scales of Cottonmouths are un-patterned. If you are not confident in your identification, please avoid approaching or handling the snake.

Distribution: This snake occurs in the eastern portions of the Carolinas and Georgia. The range extends south through peninsular Florida and then west along the gulf coast into Eastern Texas.

Notes: In certain portions of its range, this species is known to hybridize with the Northern Water Snake (Nerodia sipedon)