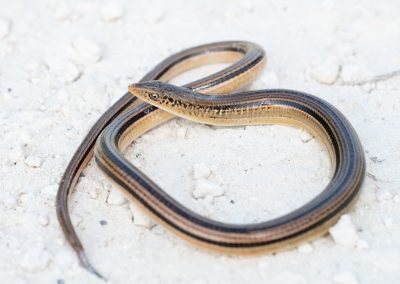 Description: Like other glass lizards, the Island Glass Lizard is long, slender, and lacks limbs. They are medium size in comparison to other glass lizards with an average adult length under 2 feet in length. They are brown to tan in coloration with a dark stripe on either side of the body above the lateral fold. They may also have a dark dorsal strip extending the length of the body. They head of the Island Glass Lizard appears slightly narrower and elongated than similar species, and this lizard also lacks fracture planes on the tail that are present in other native glass lizards.

Natural History: Island Glass Lizards are quite cryptic and rare in our region. As their name suggests they are most commonly found in sandy scrub habitats on barrier and sea islands in the Coastal Plain. Like other glass lizards, they mostly feeds on small invertibrates.

Similar Species: Glass Lizards are distinguishable from all snakes due to the presence of moveable eyelids and external ear openings. However, other glass lizards in the region may be challenging to distinguish. The Slender Glass Lizard (O. attenuatus) is typically larger and possess dark stripes on the side of the body below the lateral fold. Eastern Glass Lizard (O. ventralis) is also larger, but lacks a mid dorsal strip. And the Mimic Glass Lizards (O.mimicus) does not have prominent stripes on the side of the body.

Distribution: This lizard is found in the southern portion of coastal South Carolina and its range extends through Georgia into peninsular Florida.