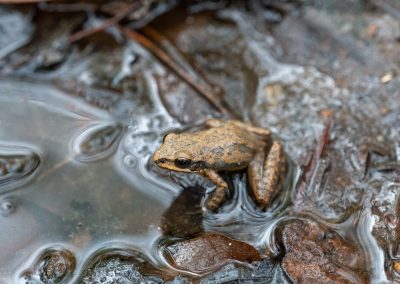 Description: The Southern Chorus Frog is a small, light-brown frog with dark, dorsal blotches and bumpy skin. The blotches may appear in a line on the back and sides, but are usually unconnected. The snout is pointed and the face of this frog usually has a narrow dark brown band connecting the eye and the nostils, with a bolder dark brown blotch behind the eye. The dark brown on the face contrasts significantly with the pale white upper lip.

Natural History: Southern Chorus Frogs breed, and are most active, in the winter months in South Carolina. They congregate in vegitated, fishless wetlands found in, or adjacent to open forests. This includes carolina bays, depression meadows, and roadside ditches. It is hear that males will call from the edges or at the base of grasses to try and attract the attention of females. Their call is often described as a finger running down the bristles of a comb.

Adults are generally inactive for the rest of the year and may occasionally be found hiding beneath vegitation on the margins of wetlands or forest debris. Tadpoles take two to three months to develop depending on waterlevels, predation and food resouces. Tadpoles mostly consume algae and decaying plant matter, while adults eat small invertibrates. At all stages of their life the are consumbed by birds, snakes, fish, small mammals, large insects, and other amphibians.

Distribution: This frog is found in the coastal plains region of the Southeastern United States, east of the Mississippi River. Its range extends from North Carolina, throughout florida, and to Mississippi.