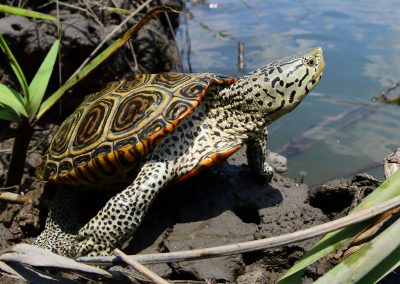 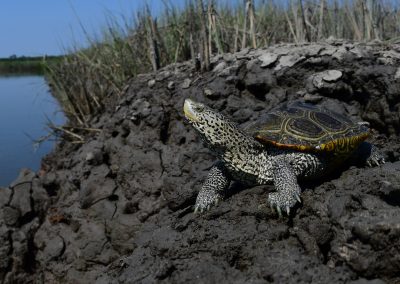 Description: This is one of the most variable, but uniquely patterned turtles in the United States. Females can have a shell size of up to 10 inches (26 cm) and have wide heads, while males only achieve lengths of up to 6 inches (14 cm) and have a notably thinner head. Both males and females generally have white or gray skin peppered variable sized black dots. Some may be completely dark or almost completely white. The carapace (top of the shell) is typically brown or black with lighter diamond shaped rings on each scute. Some may have an entirely black shell, and others may have some yellow to orange highlighting the shell and coloring the edges. The plastron is yellow and can be unpatterned or have faint mottling.

Natural History: These turtles have salt glands and several other features that allow them to live in more saline waters than their close relatives. As such, Diamondback Terrapins reside in the salt marshes and brackish water estuaries along the coast. They are strong swimmers and seen poking their heads above the water’s surface for a breath of air. Or they are spotted basking along the banks of tidal creeks. Mating occurs in early spring and large numbers of turtles may congregate in tidal creeks during this time. Females will typically lay their nests in high sandy embankments such as dunes. As they search for nesting locations in late spring, they are often seen crossing over land, including road ways.

Diamondback Terrapin’s are largely opportunistic feeders, but seem to mostly consume crustaceans and mollusks such as snails, clams, and small crabs. Due the larger head size, female terrapins likely consume larger prey items than males lessening the competition for food within the species.

Similar Species: Diamondback Terrapins are readily distinguishable from all other turtles due to their unique patterning and habitat choice.

Distribution: These turtles are found along the east coast and gulf coast of the United States. From Massachusetts to Texas. There are populations of these turtles in Bermuda.