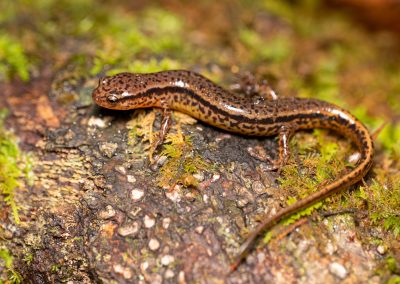 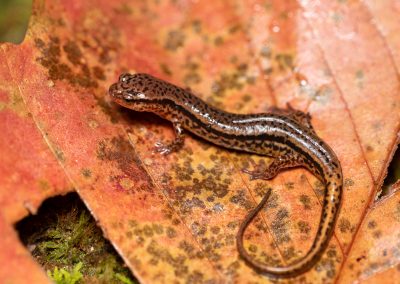 Description: This small, thin salamander rarely exceeds 4 inches in length and has 13-14 costal grooves. They are typically yellowish-brown in coloration with dark lines on their sides and varying amounts of dark spotting on their back. The belly is translucent with a yellowish wash. Males can be differentiated from females during breeding season due to the pair cirri extending down on the upper lip.

Larvae are much smaller than adults and possess external gils. They are duller and color and have a clear tail-fin to help propel them through their fully aquatic habitat.

Natural History: This salamander can be found in moist, hardwood forests along the edges of seeps or small streams. Breeding can occur at anytime of the year, but there is often an increase in reproductive activity in late winter and early spring. They may migrate to dryer habitats outside of breeding season where they will seek refuge in burrows or under forest debris.

Like most salamanders in our area, the Southern Two-lined Salamander is insectivorous and consumes small invertebrates. They themselves are food for a variety of creatures such as birds, small mammals, reptiles, large insects, and other amphibians. They can be quite abundant in suitable forest ecosystems and play a key role in the food chain.

Distribution: This salamander can be found throughout South Carolina, with the highest abundance occuring in the upper coastal plain, midlands, and piedmont region. They are found throughout the Southeastern United States. From Virginia, to the Florida Panhandle and then west to the Mississippi River.