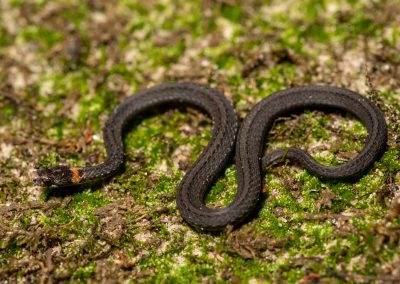 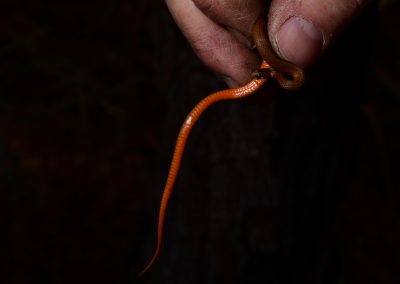 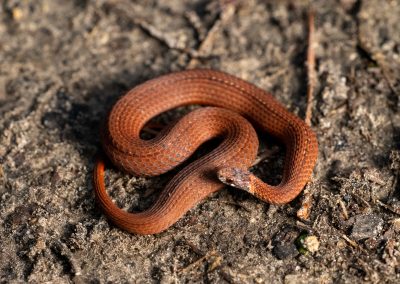 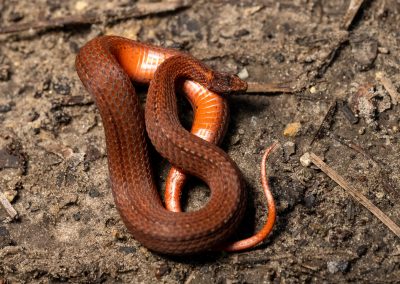 Description: This small woodland snake has an average length of under 10 inches (25 cm). Its dorsal coloration and pattern can be rather variable with colors ranging light brown to dark gray. The head is often darker in color than the body and many individuals have a faint light brown ring, or light brown spots, just behind the head. Some individuals are plain, while others may have faint lines or blotches extending down the length of the body. The key identifying feature of this snake is the unmarked orange to red belly.

Natural History: Red-bellied Snakes are specialists of wet, woodland habitats with a good amount of debris on the forest floor. They are secretive and spend most of their time under leaf litter. They are most frequently found under limbs, rocks, or rotting stumps close to a wetland. On these wetland edges they hunt for soft bodied invertebrates such as slugs and earthworms.

Similar Species: The Brown Snake (Storeria dekayi) may have a similar dorsal pattern, but will lack the orange/red belly. The Pine Woods Snake (Rhadinaea flavilata) is small and brown, but has a dark line extending through the eye. The Ringneck Snake (Diadophis punctatus) is also a small dark snake, but has a yellow ring around its neck and a marked yellow underside.