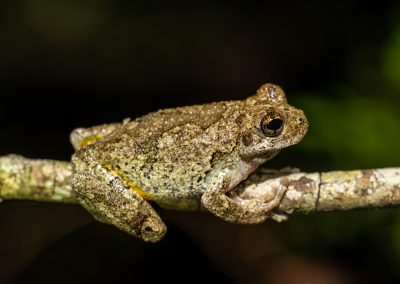 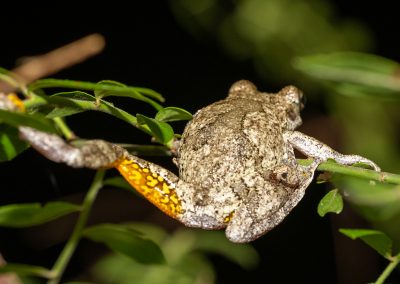 Description: This is a large treefrog with a mottled gray dorsum, bumpy skin, large toe pads, and elongated limbs. The most distinguishing feature of this treefrog are the vibrant yellow or orange flash colors and spotting on the inside of the hind legs. They typically have a light spot beneath the eye and a pale underside. Some individuals may exhibit a pale greenish coloation on the dorsum.

Natural History: This frog is most common in woodland habitats and spends most of the day perched high in the treetops, behind bark, or in tree cavities. At night they will desend and forage on a variety of insects. During breeding season they will congregate and form dense choruses along fishless wetlands such as ephemeral swamps and roadside ditches. Breeding season commonly occurs from spring through late summer.

Distribution:  On the east coast this frog is found from southern Maryland to northern Florida. Their range extends as far west as central Texas. In South Carolina, this frog is found throughout the state, but is the most common treefrog species in the Piedmont and Blue Ridge.