Details:
After a very rainy afternoon in Berkeley County, the storms dissipated and we were left with a cloudy, but dry evening. Temperatures were in the high 70s – low 80s, with a very high humidity. The group met at the Old Santee Canal Park Interpretive Center and were introduced to the park as well as a few of the interpretation animals. An Eastern Kingsnake (Lampropeltis getula) was found at the park on Friday and kept until Saturday afternoon. This snake was shown to participants, then released where it was collected. Then, with flashlights, camera equipment, snake hooks, and a few nets, we set out on the trail.

Walking across the first boardwalk listening to Prothonotary Warblers and Ospreys, we pulled a few aquatic traps set out a couple days before. These included two Eastern Musk Turtles (Sternotherus odoratus) as well as Blue Spotted Sunfish, Warmouths, Spotted Sunfish, and Mosquito Fish. Further up the boardwalk, we spotted two River Cooters (Pseudemys concinna floridana) in the water below us.

We continued along a trail that ran parallel to the edge of the Cooper River. We checked the banks of the river and found numerous Green/Bronze Frogs (Lithobates clamitans). We flipped natural cover on the land and found a young Broad-headed Skink (Plestiodon laticeps), a Ground Skink (Scincella lateralis) a young Copperhead (Agkistrodon contortrix), and a Three-lined Salamander (Eurycea guttolineata). We jetted out to a few overlooks on the swamp and spotted the unmistakable eyeshine of a few American Alligators (Alligator mississippiensis). We heard choruses of Green Treefrogs (Hyla cinerea) and the grunts of Pig Frogs (Lithobates grylio).

Tucked beneath a boardwalk, keen herpers spotted a very large Ranid. The frog was dark in coloration, lacked dorsolateral ridges, and had a partially mottled lower lip — these characteristics suggested this individual was a River Frog (L. hecksheri). This would be a new species for the Park. We were unable to capture the frog and observe in the hand, but a couple folks were able to snap some quick photos of the frog.

As we looped back towards the center, we continued to flip natural cover, shine wetlands, and listen for frogs. We were able to observe many Green Treefrogs, Pig Frogs, and Green Frogs calling from the grasses. A group stumbled on a Scarlet Kingsnake (Lampropeltis elapsoides) crossing the path (snake was taken back to the center for photos, but released where it was collected at the end of the night). Back at the center, two Plain-bellied Watersnakes (Nerodia e. erythrogaster) were found foraging in the man-made waterways around the building. Also a recently metamorphosed Southern Leopard Frog (Lithobates sphenocephalus) was perched on the edge of one of these waterways, and an Eastern Narrow-mouthed Toad (Gastrophryne carolinensis) was heard vocalizing.

This wrapped up a wonderful evening with a great group of herpers! 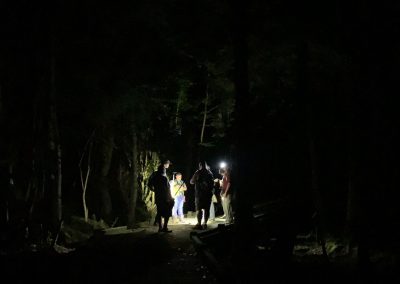 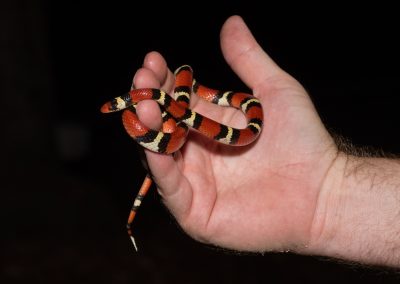 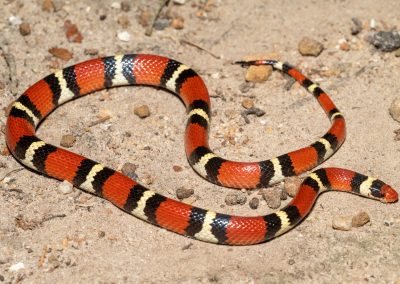 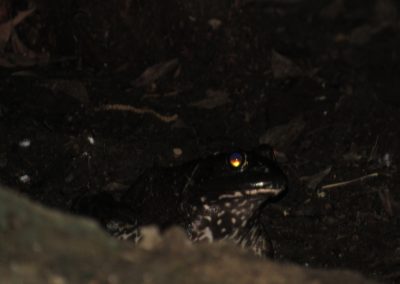 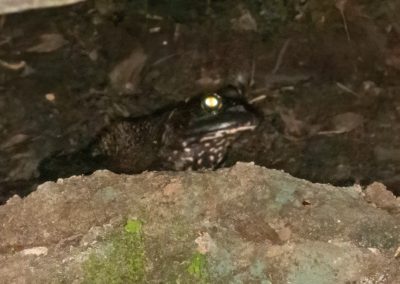 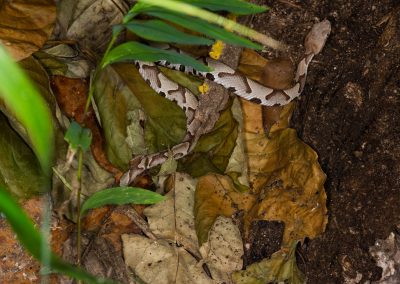 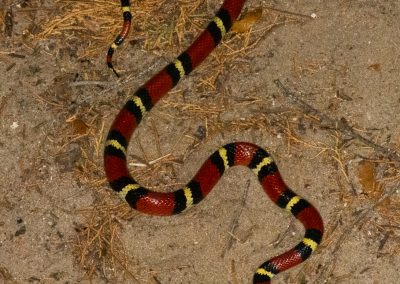