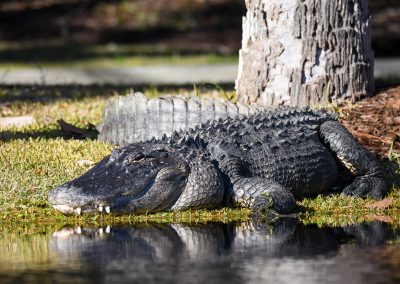 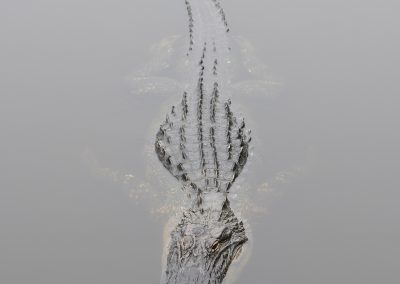 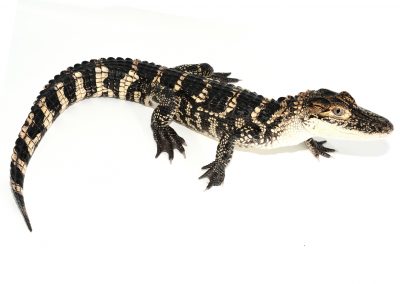 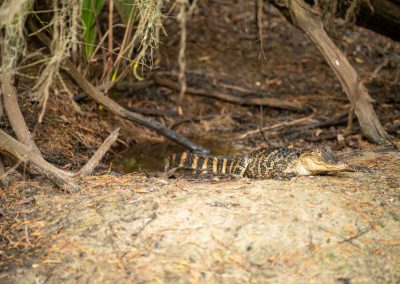 Description: There are few animals more iconic to the place they reside than the American Alligator is to the Southeastern United States. Its impressive stature, and importance to freshwater wetland habitats is insurmountable. Full grown males can reach lengths of up to 13 feet in South Carolina. Full grown females are smaller – measuring up to about 8 feet. They are a deep, muddy green or grayish color above, with a pale underside. They are pattern-less as adults. Juveniles start at about 6 inches in length and have striking yellow stripes crossing their body on to the tail. They will retain a semblance of this pattern until they reach several feet.

When viewed from above, the head of the American Alligator makes a wide u-shape. From the side, the nostrils are notably raised as well as the eyes. Teeth are present along the edges of the mouth from the upper jaw only. The back of the alligator is covered in bony plates referred to as osteoderms that are thought to aid in protection as well as thermoregulation. Smaller and less ridged scales cover the sides of the alligator as well as the legs that culminated in partially webbed feet. The tail is approximately half the length of the alligator and starts wide and vertically flattens towards the final half of the tail.

Natural History: The American Alligator is tied to freshwater habitats. They can be frequently observed on land, or in brackish marshes and impoundments, but will rarely stray far from freshwater sources. These include ponds, lakes, swamps, marshes, and slow moving rivers and streams. They are the apex predator of these environments and will consume almost anything they are able to swallow. This most commonly includes fish, reptiles, amphibians, birds, small mammals, invertebrates, and carrion. They have also been observed consuming larger mammals such as deer and deploy several strategies to rip apart larger food items.

Adult alligators are engineers of the habitats they live in. They will often dig dens into the embankments of wetlands, and will also carve out holes in flatter wetland areas — these excavations provide refuge for a number of other organisms as well and earn alligators the honor of being a keystone species.

Female alligators will also push together sticks, leaves and mud creating large mounds for nesting. This process typically begins in the Spring and females will lay 20-50 eggs in the center of the mound. The female will continue to remain near the nest and protect it from intruders for the entirety of the 65 day incubation period. She will be alerted to the hatching by a series of yelps emitted by the young and will help dig the hatchlings out of the nest and carry them to the water.

Young alligators spend most of their time in shallower and highly-vegetated areas. They will also eat almost anything they can including invertebrates, amphibians, small fish, and small reptiles. In turn they are consumed by almost any predator larger than them such as raccoons, bobcats, larger reptiles, large frogs, birds, and other alligators. As such, the mother will remain close to her young for the first several years of their lives and will be alerted to increased levels of stress by their yelp calls. As the young alligators increase in age and size they will begin to venture further away from the protection of their mother.

Distribution: The American Alligator is a resident of the Southeastern United States. They are found in the coastal plains and low elevation areas of the Carolinas and Georgia, throughout Florida and then west to Eastern Texas. A few populations are found in Western Tennessee.

Notes: Human-alligator incidents are rare, but have occurred. Naturally alligators have a healthy fear of people and will retreat rather than approach a person. However, to minimize any risks it is recommended that people stay alert along pond edges, fish in areas away from alligators, and keep a respectful distance from alligators on banks and in the water. It is illegal in the state of South Carolina to feed wild alligators — these laws are in place to maintain the natural fear alligators have of people. 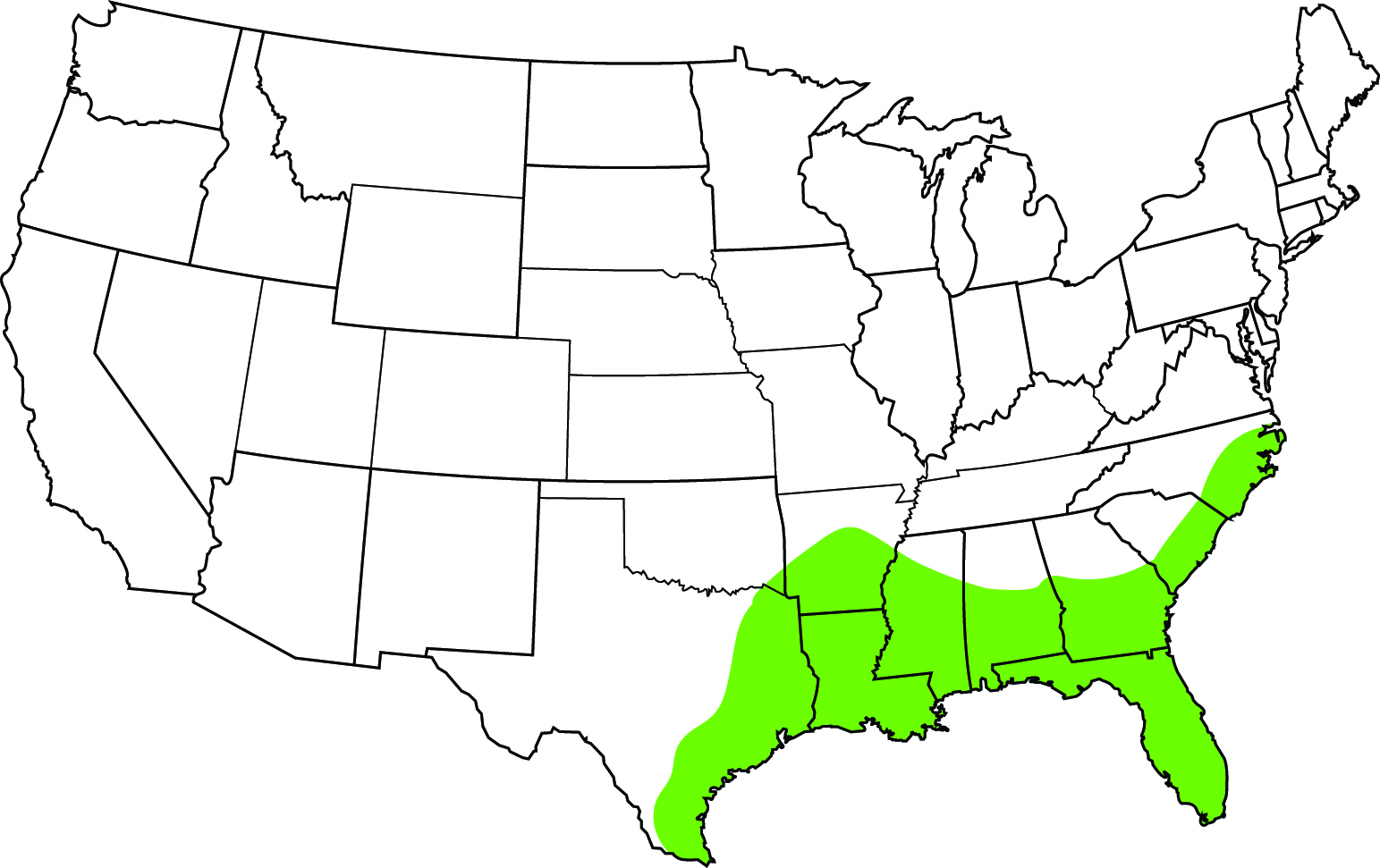